Two of the hottest phones will be coming to a US cell company near you, and the countdown has just begun. The top four carriers in the US have recently confirmed they will feature the US release date of the upcoming HTC One M9, Samsung Galaxy S6, and the Galaxy S6 Edge. For most of us, the news comes as no surprise as Verizon, AT&T, T-Mobile, and Sprint were all expected to feature the flagships from two of the top smartphone manufacturers.

The news comes shortly after the MWC event only weeks ago, and before you know it you can get your hands on two of the hottest tickets this year. We’ve been speculating on the follow-ups to the Galaxy S5 and the HTC One (M8), and the confirmed US Samsung Galaxy S6 and HTC One M9 release date will start in a matter of weeks. 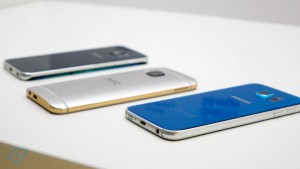 Up first will be the Verizon, AT&T, T-Mobile, and Sprint HTC one M9 release date which is believed to start on March 25th. Most Asian markets are likely to feature the M9 release date before making its way to the UK, US, and European markets. Here in the US, the M9 will arrive at all four of the US carriers as soon as it passes the FCC inspection which should be by the middle of April.

Stay tuned for more info including the latest Verizon, AT&T, T-Mobile, and Sprint Galaxy S6 and HTC One M9 release date updates as soon as we get it.