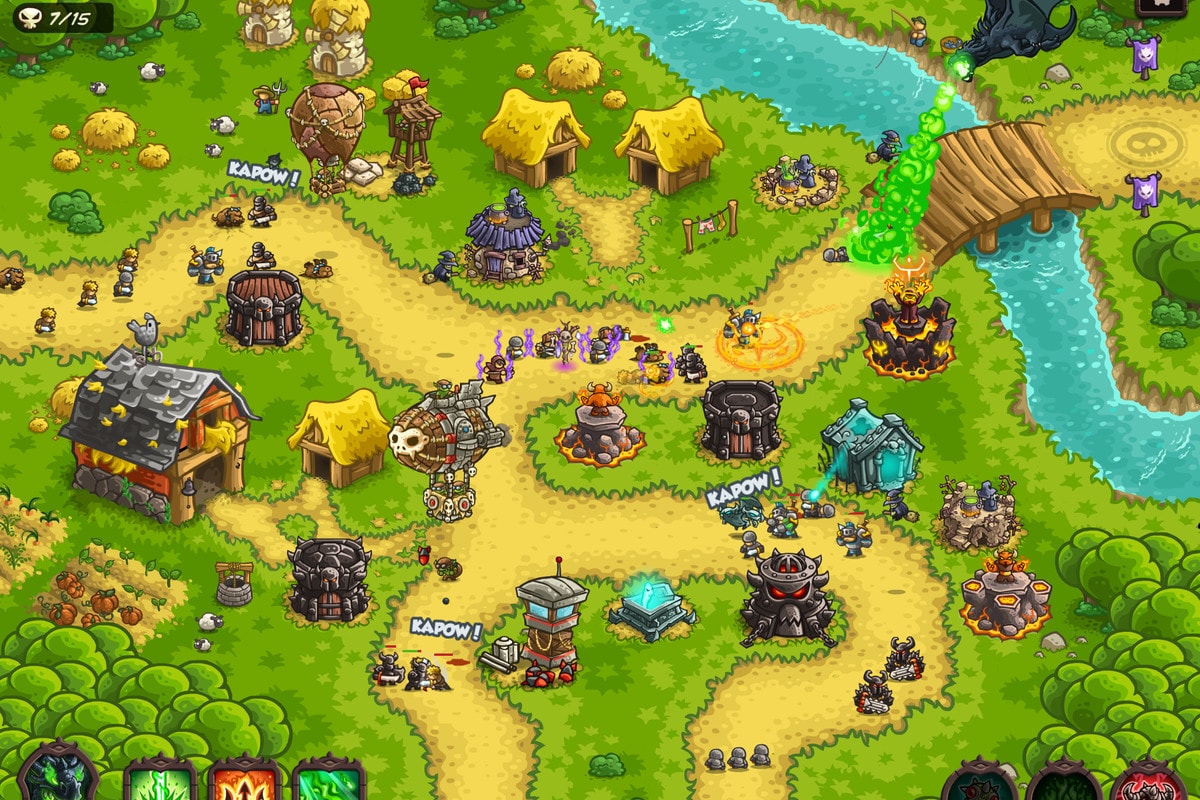 Tower defense games are very popular among the mobile gamers around the world. They give you a huge excitement while maintaining simple tap controls. So, everyone can play them easily. Due to the massive market demand, a huge number of developers bring new tower defense games every year. So, locating the best ones can be really difficult. To help you, we have compiled this list of the top 10 tower defense games to play on Android devices in 2019. Take a look at them.

Bloons TD 6 is one of the most popular tower defense games. It comes with 20 different maps, 19 towers and three upgrade paths. Unlike the other games where you face waves of soldiers and knights, you will fight against the masses of balloons. But that doesn’t make it less interesting. Each of the balloons has special abilities. They can give you a very hard time. To fight them, you will have to deploy your army of monkeys tactically to burst the balloons. The gameplay is really exciting.

Defenders 2: Tower Defense CCG gives you a massive excitement through numerous highly challenging battles. Apart from being one of the best tower defense games, it is also known as a great card collecting game. In that sense, it’s a hybrid. There are 40 towers, 20 spells and 29 bosses. There is also a PvP mode. However, the game is freemium. That means, after playing for several dozens of hours, Defenders 2: Tower Defense CCG will begin to bother you for money. Nonetheless, in terms of gameplay and visuals, it’s a fantastic game.

With unique sci-fi style, Defense Zone 3 has become one of the best tower defense games of this generation. It comes with tons of new weapons and landscapes. However, there are only 8 towers. Here, they are called turrets. But on the bright side, all of them have special abilities, ranging from air strikes to nuclear bombs. You can also change the difficulty level to make it fit for your skill level. The graphics is really cool. There is nothing to complain about this awesome game.

Dungeon Defense is quite different from the other tower defense games on this list. Here, you will have to place the heroes on the border and take out the waves of invaders. You will be able to upgrade your characters with different weapons on the way. In this way, you can enhance your strength and destroy the enemies faster. Unlike the most other games in its class, it features retro music and graphics. If you love classic games, you will love to play Dungeon Defense.

Digfender is fun to play. According to different reputed gaming publications, like Gameranx, no other tower defense games are like it. Here, you will dig deep into the ground and defend the path you dig. You will have to collect valuable treasures and ancient relics on the way. There will be waves of enemies. You will have to build towers to destroy them with your loots. Digfender has 70 different levels, along with a survival mode, where you can challenge your friend for topping your high score. There is no wait time. So, you can play it as long as you want.

Infinitode doesn’t come with stunning graphics. Instead, it has minimal visuals. But it doesn’t make it a bad game. Infinitode is really fun to play. You can build a thousand of towers, which is insane. You get massive maps to build everything like a mad man. The maps are editable, further enhancing the fun. Solid gameplay, endless elements and zero pesky ads have made Infinitode one of the best tower defense games on the Play Store right now.

Iron Marines – One of the Most Engaging Tower Defense Games

Iron Marines is a relatively new game. However, it has achieved a massive popularity within a short time. The overall feedback rating of 4.7 stars says it all. Thanks to the engaging gameplay, amazing visuals and the addition of humorous elements. Here, you will move around unknown planets. You will have to train and lead the heroes to the victory. You will get a variety of troops, ranging from snipers to flamethrowers. There are 14 campaign missions, ten special missions and the Impossible Mode, which you will have to unlock. So, there’s a plenty of stuffs to go through.

Kingdom Rush is the most prolific tower defense game franchises of the mobile game industry. The Vengeance is its newest addition. It retains the same mechanics as its predecessors. Here, you will have to fight and conquer the realms. There are 17 new towers with unique abilities. You will get 10 powerful heroes to take out 40 brutal enemies. You will have to implement your strategy masterfully to clinch the win. Kingdom Rush Vengeance supports both online and offline modes. Right now, it’s one of the best tower defense games that you can find right now for Android devices. The feedback rating of 4.7 stars clearly shows its massive popularity.

Myth Defense LF – One of the Most Challenging Tower Defense Games

If you are a hardcore fan of tower defense games, you must play Myth Defense LF. It offers tricky tower defense action, from start to finish. You will face over 780 waves of enemies, desperately trying to intrude your city. You will have to protect your tower as well as taking down your rivals’. The game is really challenging. Each wave is more difficult than the last. So, if you are a casual gamer, you will definitely struggle. However, if you are a hardcore gamer, you will surely be pleased with the deep gameplay.

This is the end of the article. What do you think about our list of the best tower defense games? Which one are you playing right now? Is your favorite game missing? Share your thoughts by hitting the comment button.