Robots are a new tech trend that truly helps simplify many things in life, and at this year’s CES event in Las Vegas a new one was born. Enter Budgee Bot which is being heralded as a new innovative tech robot that not only simplifies life, but also adds a cute new element. The tech robot is being marketed for in-home use as the physical nature of the robot itself is expected to appeal to consumers of all ages.

Budgee Bot can carry heavy things such as groceries, interact verbally with people, and even becomes responsive in its own environment. The tech giant Five Elements Robotics introduced Budgee at CES and dazzled crowds with the ability to carry objects in excess of 50 pounds. The robot on wheels can also learn its surroundings making it responsive in familiar environments. 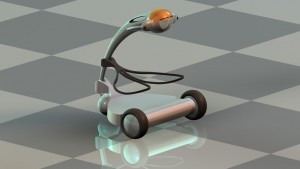 One of the most unique Budgee Bot features is the ability to not only interact with people, but is more polite than most. Talking and even stopping to allow someone else to pass is only some of the many polite gestures that this tech robot offers. The ability to collapse and become portable will make it easier to take Budgee along with you, virtually anywhere.

As of this time, there’s no official release date or price, but speculation has Budgee being released by mid-summer of 2015. Stay tuned for the latest info on Budgee Bot including the release date, price, and features as you will find it all here before anywhere else.