Sony is staying committed making their handsets available globally, and the debut of the Verizon Sony Xperia Z4v typifies this. There will be many differences and similarities between the previous Sony smartphones including the Xperia Z4 which debuted in Japan and the Z3+ which debuted in other markets. 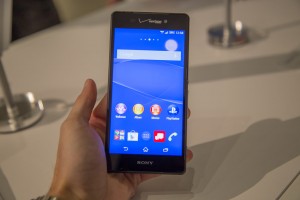 At first sight, the Xperia Z4v looks similar to the Z4 and Z3+, but a closer look reveals a slightly thicker and heavier handset. Underneath it all, the battery is slightly larger in the Verizon only Z4 as it boasts a 3200 mAh battery, Quick Charge 2.0, and wireless charging.

The Z4v also sports a Quad 5.2” HD display with a resolution of 1440 x 2560. This Sony’s 1st attempt with a Quad display, and it looks absolutely amazing. With a ppi of 564, on paper it’s easily the clearest, and sharpest screen we’ve seen from Sony so far.

The Sony Xperia Z4v is a Qualcomm powered handset sporting the Snapdragon 810 Soc processor. It’ll be interesting to see if the firmware update that Sony is releasing for the Z4 and Z3+ that’s created to address overheating will be preinstalled. 3GB RAM, 32GB internal memory, 20.7MP rear camera, 5MP front camera, and will sport both waterproof and dustproof features.

As of now, there’s no official Verizon release date or price that’s been provided, but we’re not expecting the announcements to take much longer. Now that the phone’s been made official and considering Sony’s stance of bringing their most newest flagship to the US, it should be sooner rather than later.