HTC decided to go in an entirely different direction with the official HTC One M9 release as there were no true design enhancements, but there was the announcement on the new Uh-Oh program. Most of us were expecting to see some huge differences when looking at the current HTC One (M8) and upcoming HTC One M9. Despite seeing no major overhaul, it doesn’t meant that HTC neglected to give us something truly new and unique.

The new HTC Uh-Oh Protection Program will appeal to consumers who really need it, and those who won’t. The new program is open for a limited time and is given to consumers for free when purchasing a new HTC One (M8) and the new HTC One M9 between March 25th and August 31st. 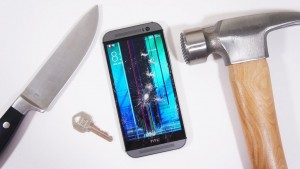 The new Uh-Oh Program gives consumers the ability to get a new M8 or M9 (depending on your purchase) with a no-questions-asked protection plan that covers any damage including cracked screens, water damage, and hardware damage. You will receive a brand new phone of the same model and all you have to do is ship the phone directly to HTC and check your mail in a short amount of time. You will also get a brand new phone that is tailored specifically to a cell carrier if you switch carriers within a year from purchase.

The total time of the plan is for one year from the time of purchase, and is good for only one replacement within that year. For those who don’t need a replacement within the year, HTC intends on rewarding you as well. If a full year goes by from the date of purchase and you don’t use the HTC Uh-Oh program, you will get $100 cash back that can be applied to the purchase of a new HTC smartphone. You will get to retain your current M8 or M9 and can even trade it in or sell it for even more money towards a new purchase or that new pair of shoes you’ve always wanted.

The HTC Uh-Oh Protection Plan is only for a limited amount of time, and only covers new HTC One (M8) and HTC One M9 smartphone purchases beginning March 25th and ending on August 31st.

Feel free to tell us what you think about the new Uh-Oh Protection Plan, and if it will be enough to overlook the lack of an enhanced HTC One M9 design.