HTC has finally announced that they will be getting back into the Android tablet industry, but on a limited basis. The confirmation comes on the heels of much speculation as one of the top tech manufacturers looks to start producing only premium HTC Android tablets. This looks to start sometime in 2015 as the confirmations comes only months before the annual CES event.

Higher end Android tablets are more marketable as there is far less competition at the present time. We’ll probably see something from HTC along the lines of the new Nexus 9 Android tablet. The Nexus 9 is one of the top premium Android tablets on the market today, and based on the HTC concept this would make the most sense. 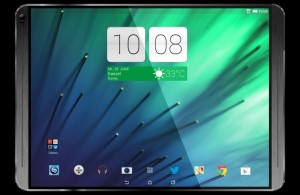 We are hearing rumors that the HTC tablets will probably be in the 8 – 9 inch range, and may retail for as $400. The new HTC Android Tablet specs could be comparable to the Nexus 9, but with an LED capacitive touchscreen display. We’re also hoping to see a pixel density near 300 ppi and a screen resolution of at least 1536 x 2048.

A non-removable 7000 mAh battery, primary camera with at least 8 megapixels, and a dual core 2.5 ghz processor would compliment any premium tablet. If released in 2015 like we believe, it would also come preinstalled with the latest Android Lollipop 5.0 operating system.

As more information comes available on 2015 HTC Android tablets you can expect to see it here first.