The US launch of the LG G Pad 8.0 is finally here, and AT&T is the first US carrier to feature the release. The follow-up to the budget friendly G Pad 7.0 is being highly regarded due to improvements in virtual every technical aspect of the new tablet.

The AT&T LG G Pad 8.0 release has been announced starting May 29th, and you can pick one up either online or at an AT&T store near you. The AT&T price is very comparable to other budget friendly tablets, and can be purchased outright or on a monthly payment plan. For either $149 for the full price, or $10/month, you can pick one up in a matter of days. 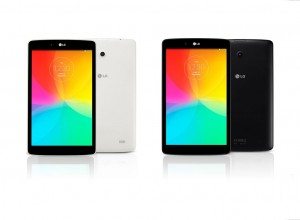 The LG G Pad 8.0 specs feature an 8” IPS Capacitive display with a resolution of 800 x 1200. It will be powered by a Snapdragon Qualcomm 400 octa-core processor clocked at 1.2GHz, and will have 1GB RAM of dedicated onboard memory. 16GB of internal memory and micro SD card support along with a 5MP rear, and a 1.3MP front-facing camera.

The G Pad 8.0 can be found in multiple colors including black, blue, orange, and white, and AT&T is expected to be featuring all colors on the 29th. You can check out all the details on the official AT&T LG G Pad 8.0 launch page to get the specifics on what looks to be a top-selling tablet release for this year.