For those looking for an Android smartwatch that has some amazing specs, cool design, an amazing user experience, then enter the Asus ZenWatch. The ZenWatch makes our list of the top Android Wear Smartwatch due to many reasons, and below you will see the top five. When looking at the top Android Wear smartwatches on the market today, there are only three that can be considered in the same class. 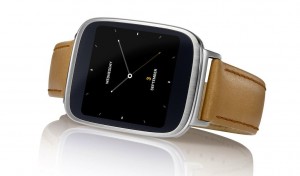 Below, we take a look 5 reasons why the Asus ZenWatch is currently the top Android Wear Smartwatch:

The new kid on the block called the Asus ZenWatch brings it all when looking at visual appeal, performance, durability, efficiency, and the ability to customize. The top Android Wear Smartwatch has its own nuances that most smartwatches have, but the ability to conveniently look over them for the brightest aspects is quite easy.

Most Android Wear smartwatches are considered something less than appealing to look at, which is just the opposite when looking at the ZenWatch. The square design keeps the traditional look while the stainless steel surround and leather strap gives the style that most others are lacking.

Not too Big, and Not too Small

Aside from design appeal, the second thing that people notice about smartwatches is the overall size. The Asus ZenWatch is not too big, and not too small, as most average size adults have said it’s just right. When comparing the diameter with other Android smartwatches it’s actually bigger than most, but its slightly thinner. The ZenWatch has an outer curve around the display which allows the sides of the watch seat down a bit which gives it the illusion of being smaller.

Asus does a good job with extending the functionality between the ZenWatch and Android smartphones. Three apps including the ZenWatch Manager, Remote Camera, and Wellness gives users even more functionality that wasn’t there out of the box. Below are some of the features:

One of the top reasons why the ZenWatch is our top Android Wear Smartwatch is the ease and many customization options. While most will say that the copper colored leather band is one of the best looking, you can easily say it’s not for you. Users can swap out the band for any other standard smartwatch band sized at 22mm.