The Asus Zenfone 2 was released in 2015. With the combination of great customization options and a very reasonable price tag of only $299, the device managed to create a massive buzz among the middle-class consumers. And now in 2017, the price has been lowered to $189. In terms of hardware and camera performance per dollar, it is simply unbeatable. But does the lower price tag force Asus to take away some of the most essential features? In this review, you will find the answer to the question. 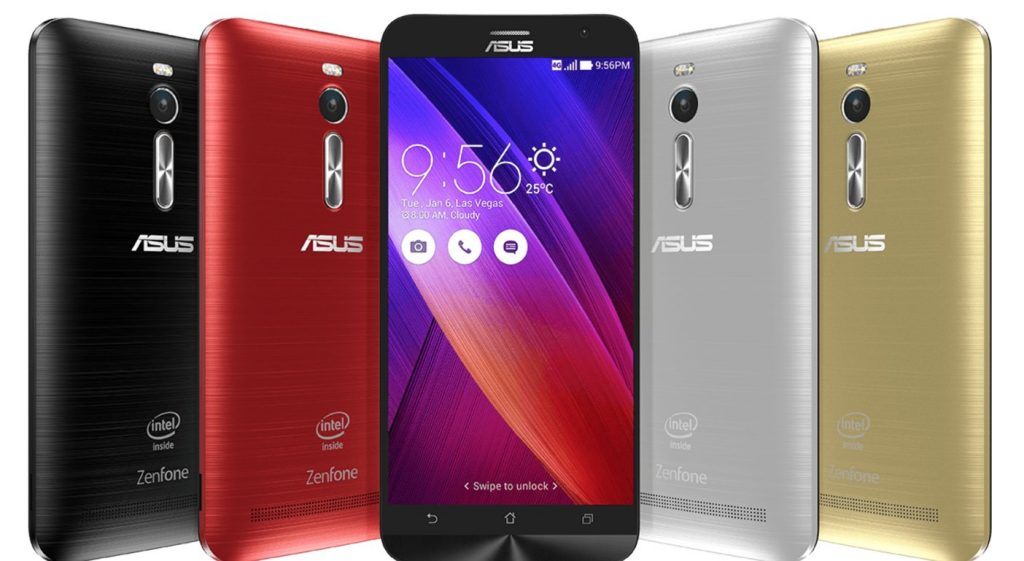 Major manufacturers always give their best effort to make their smartphones extremely strong and look beautiful simultaneously. However, the thing is quite different for the Zenfone 2. The metal brushed design fails to catch the attention at the first sight. It looks and feels really cheap. The build quality is nowhere near to the iPhone 6S and Galaxy S6. If you accidentally drop the device, the cracks will spread all over the body and display.

The Asus Zenfone 2 is also a much thicker smartphone. It has a thickness of 10.9 mm, which is a way higher than the 6.8 mm Galaxy S6. Thanks to the curve back. So, it might not fit in the pocket of your tight jeans perfectly. Weighing 170g, the device has become really chunky.

We have found a major design issue with the placement of the speaker. Being located across the rear, the single speaker fails to generate a buzzing noise while playing songs. Asus should have placed it to the bottom, which we believe is the right direction.

The placement of the power button in the top center looks really odd. But more importantly, it doesn’t have the clicky feedback. But fortunately, the volume button shows a great tactical feedback. 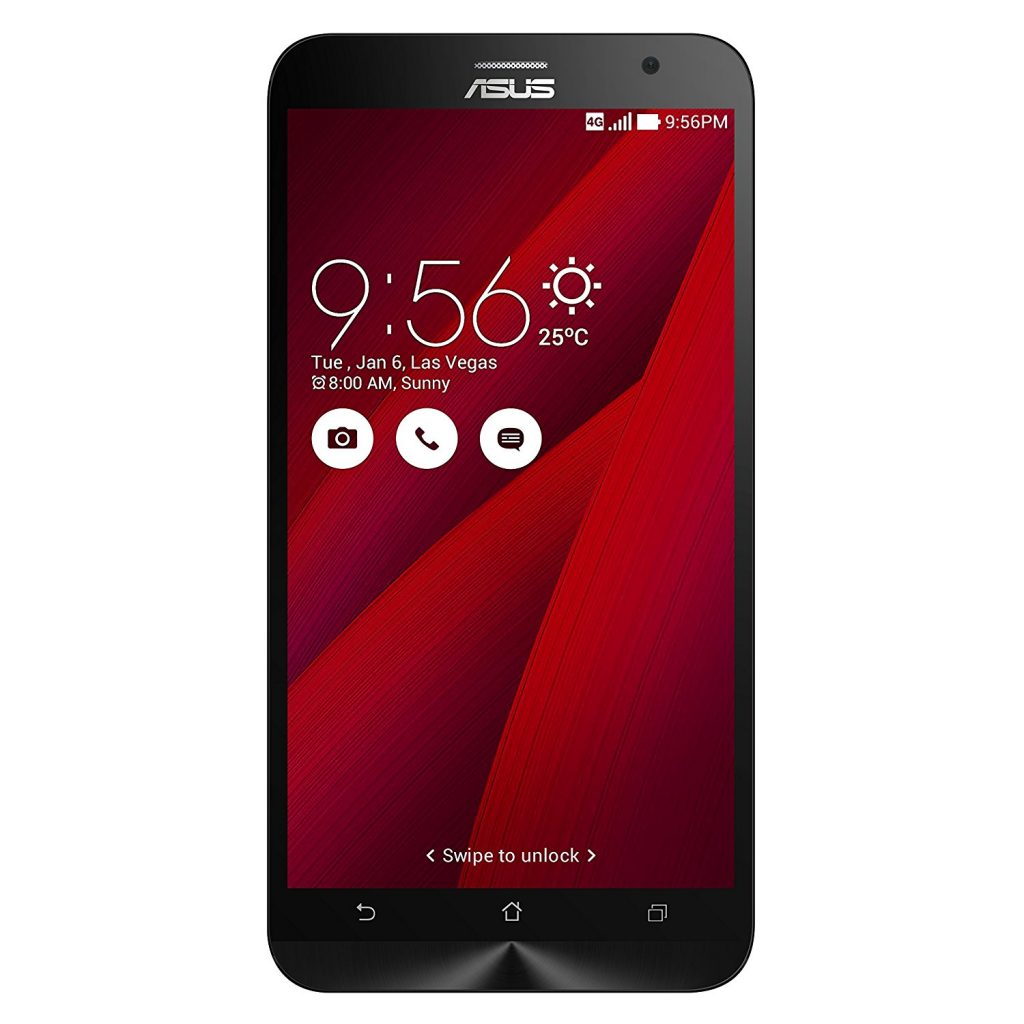 The Zenfone 2 comes in two different models with respect to the screen sizes. The first one has a massive 5.5-inch, full-HD IPS LCD display. It is perfect for watching movies or YouTube videos during leisure. The second one comes with a 5-inch HD display, which is great for those who prefers compact devices over super-sized ones. Asus decided to protect the screen with the Corning Gorilla Glass 3. On the other hand, the other flagship smartphones of 2015 came with the upgraded Gorilla Glass 4.

The 5.5-inch display has a color temperature of 7622K. Due to the colder color tone, a bluish hue is produced. The gamma value of 2.8 shows that the screen has a good contrast level. However, it fails to show the images in accurate colors.

The display is also not as bright as it should be. Its maximum brightness is only 442 nits. So, you will struggle a lot watching texts in it on the bright sunny day. The readability on such environment is really poor.

But on the bright side, the display performs brilliantly in terms of daily usage. We find it very responsive. It does really well with the gaming. Watching videos on it is a real pleasure. 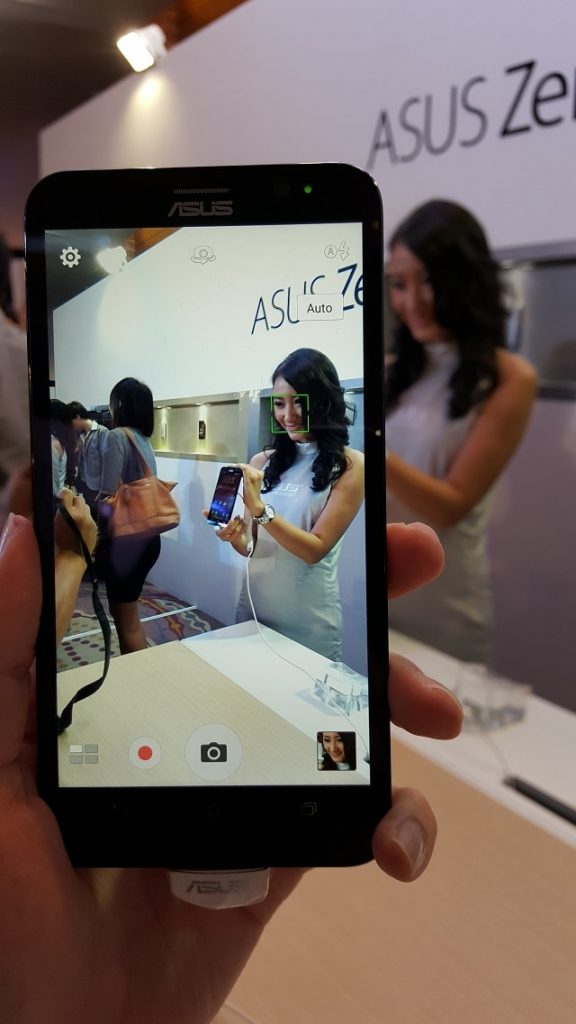 One of the major highlights of the Asus Zenfone 2 is the 13-MP rear shooter. It shows an amazing performance in the low light condition. With the low light mode, called PixelMaster, you can take well-lit shots in the relatively darker environment. However, you need to hold the device very steadily. Otherwise, the shots will be blurry, as the specific mode is extremely sensitive to the movement.

In the environment with a plenty of light, the rear shooter performs brilliantly. The captured images look surprisingly bright. In terms of sharpness, it is quite close to the cameras of the iPhone 6 and Galaxy S6. But sometimes, the colors seem to be oversaturated. As a result, the color of clouds might not be depicted naturally in the captured images.

The 13-MP primary camera can also record full-HD videos. But to get the best performance, you must perform the recording in the bright light. But do not expect the same performance under low light, where the frame rate decreases significantly. 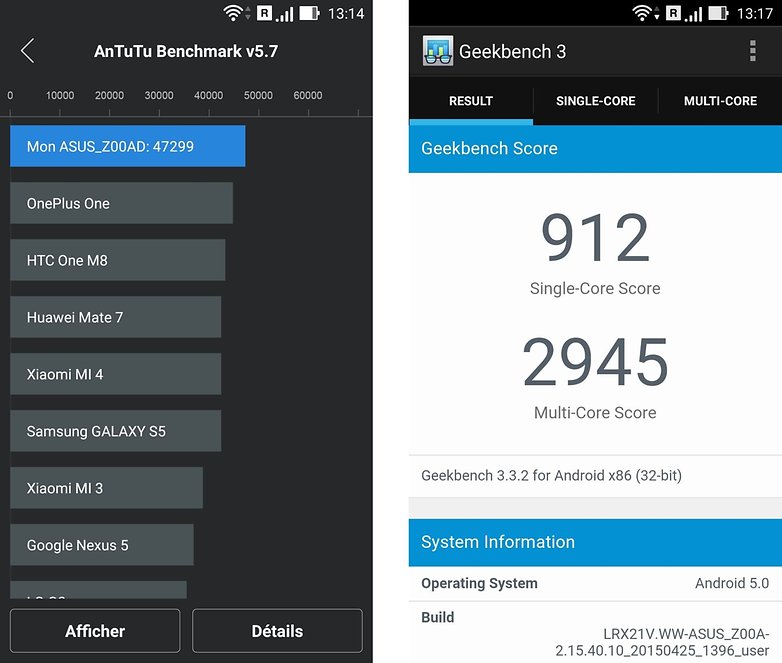 The Asus Zenfone 2 has been packed with a powerful hardware, including Intel Atom Z3580 quad-core processor, which has a clock speed of 2.3 GHz. It is the very first smartphone to sport the massive 4 GB RAM. As a result, the device becomes furiously fast and capable of dealing with all the high-end apps and multitasking functions flawlessly.

The super-fast performance has been exposed in the benchmark test. In the Geekbench 3 test, the device scores 2,945 points. Consequently, it outsmarts Galaxy S5 (2,900 points) and HTC One M8 (2,866 points). In AnTuTu benchmark test, it scores 47,299 points.

The gaming performance is very impressive. The PowerVR Series 6 G6430 GPU is able to produce absolutely stunning graphics. A great way of testing the GPU’s capability is running graphics intensive games, like Real Racing 3. While playing it, we are blown away by the gorgeous cars and surroundings. More importantly, we haven’t experienced any fps drop.

Overall, in terms of performance, the Zenfone 2 shines for its price. As a result, it gets an outstanding feedback from us in our review. 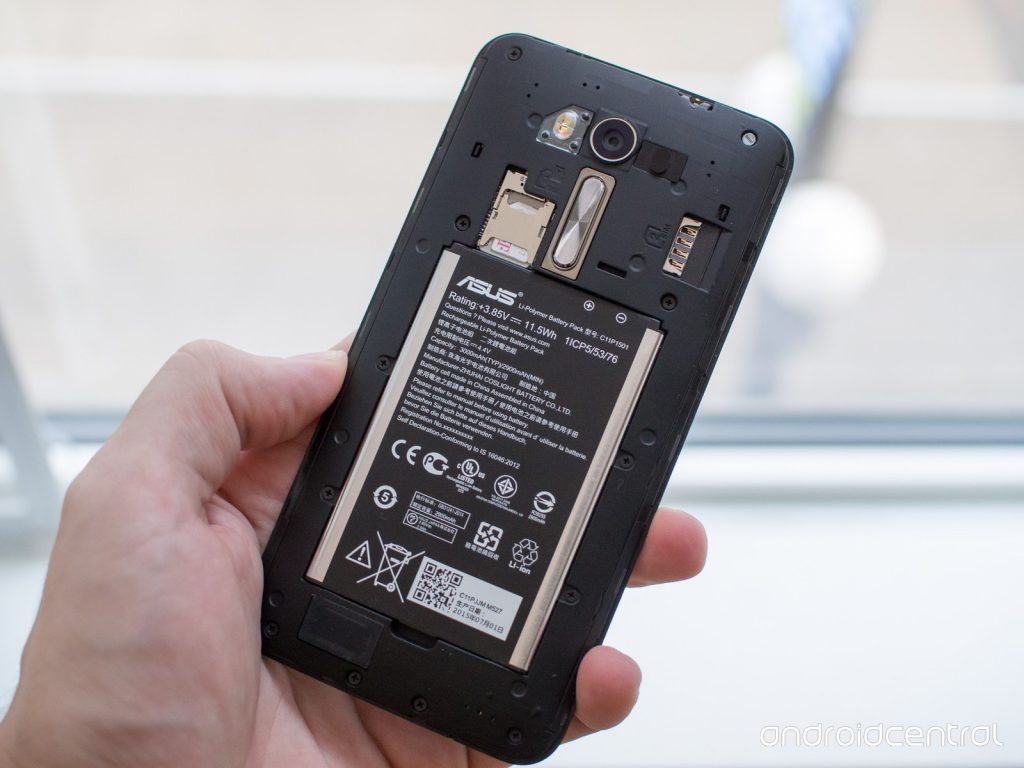 The 3,000 mAh battery can last a day comfortably. However, it cannot make two days like the Galaxy S6 battery. In the video loop test, it survived 9 hours and 33 minutes, which is not a bad performance from a relatively cheap smartphone.

In GSMArena’s endurance rating test, the battery lasted 59 hours when both SIM cards are inserted. But when a single SIM is used, the rating stretched to 62 hours. So, if you do not use dual SIM cards, you are the real gainer.

While playing Real Racing 3, the battery is drained out pretty quickly. However, you can charge it to 60% in just 40 minutes. Thanks to the fast charging technology. 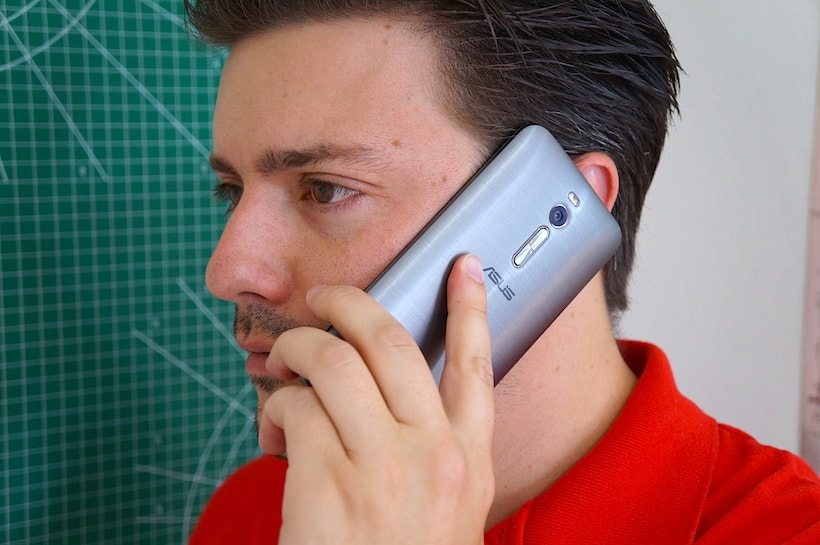 The call quality of the Zenfone 2 is quite acceptable. The earpiece produces a loud, crisp and clear voice. So, you will not face any issue hearing in the noisy environment. However, the performance of the loudspeaker is not up to the mark. As mentioned earlier, the speaker has been placed across the rear. So, the sound cannot be passed perfectly. 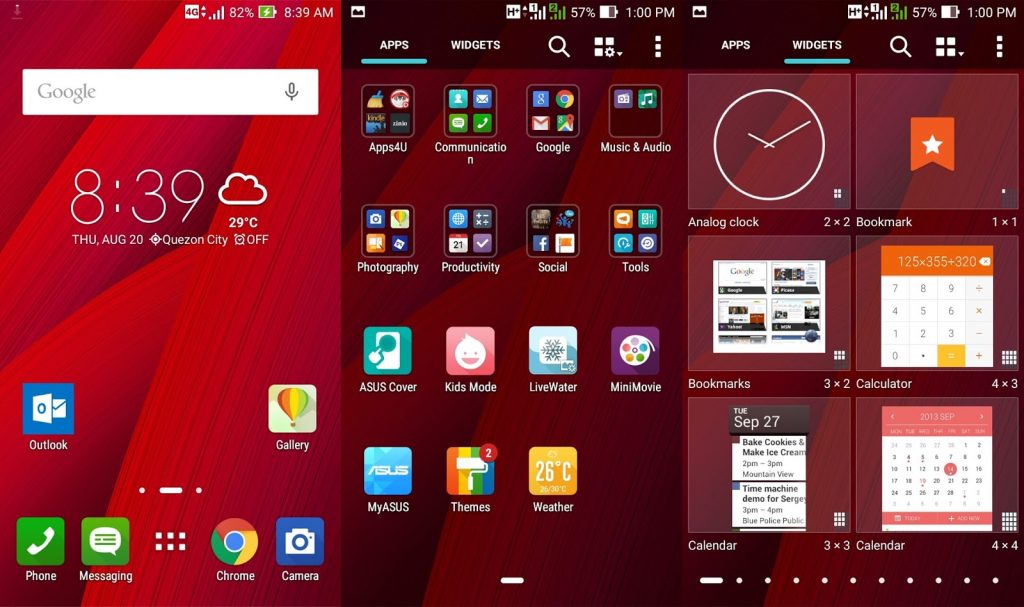 The Zenfone 2 comes with the Asus ZenUI, which has been loaded with tons of custom features and personalized options. It’s really hard to remember all of them. But here is an example that shows how much effort Asus has put to enhance the customization. You can turn the display on / off by tapping it twice. The ZenUI also provides you with the complete control for customizing scroll effects, folder icon styles and icon packages.

There are a large number of downloadable themes. They can change up the total appearance of the user interface. 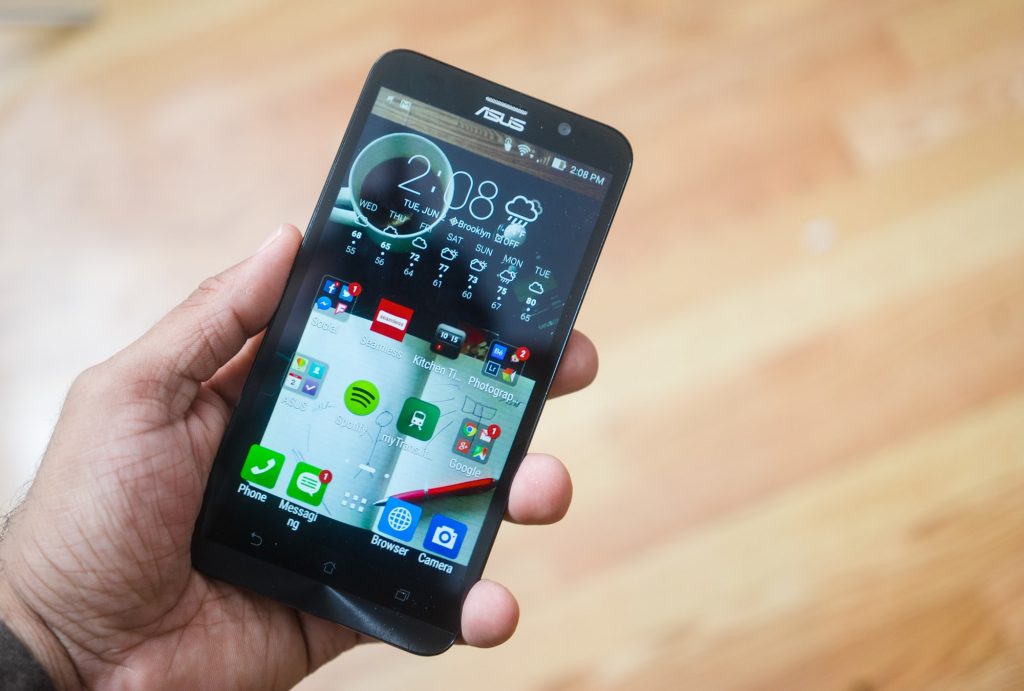 Asus Zenfone 2 is still considered as a fantastic smartphone in terms of the cheap price tag. It may not have an eye catching design and an outstanding battery life. But in all other aspects, the Zenfone 2 gets a thumbs up. With the Intel Atom Z3580 processor and 4 GB RAM, it has become the fastest and the best performing handset in its class. Its camera performance in the low light condition is superb. You cannot find a better smartphone at $189 in the market right now.