For the 2nd consecutive quarter, Android is the most widely used operating system platform with Apple’s IOS coming in at a close second. The numbers are in, and here in the US Android holds a market share of 52.4% compared to the 42.6% of Apple which shows that consumers are using the most widely used operating system in the world right here in the states. Microsoft comes in 3rd followed by Blackberry holding onto a slim 1.6% of the market.

As far as smartphone sales here in the US during the same time period, Apple are the most widely sold smartphones with Samsung coming in 2nd place. Apple holds 42.6% of the US market with Samsung falling slightly but still holding onto just under 30% of the market. 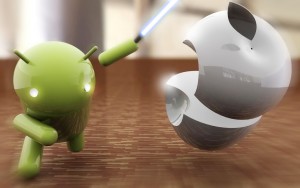 The numbers may change during with the 2nd quarter sales of 2015 largely in-part to the release of the Galaxy S6 and S6 Edge which were launched in April. The 2nd quarter goes from April through June so it will be interesting to see if the S6 release is enough to overtake Apple for the top spot in US smartphone sales.

During the summer it’s anybody’s guess as Apple and Samsung are both to release their new flagships. Either Apple’s iPhone 6s or the iPhone 7 and Samsung’s Galaxy Note 5 are expected to launch here in the US during September or October.