Google confirmed a lot today at the annual event, but it may actually be what Google confirmed will not be coming that created the biggest stir. There has been a lot of speculation on what many believe will be the name of the next Android operating system, to the point where it’s been quite comical. We’ve heard of virtually every desert , but the single most consistent name we’ve been hearing has been Milkshake.

Following Google’s footprints, we can almost guarantee the name of the next operating system will begin with an “M”. Taking it one step further and knowing what Google loves the most, Android 6.0 will definitely be some sort of dessert. This is where the Milkshake speculation has come into play, but this ended today with a Google Exec confirming won’t the name won’t be. 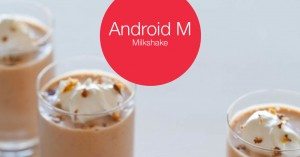 This will only continue the debate of what the Android 6.0 name will be as the speculation will surely continue until Big G makes the announcement. With a Milky Way, Musketeer, and many other names still in circulation, this means we’ll have a few more months of fun before its official.

Android, M, Android 6.0, or whatever you want to call it for now it likely to be made official during the end of the third quarter setting up a release starting October or November on select devices.